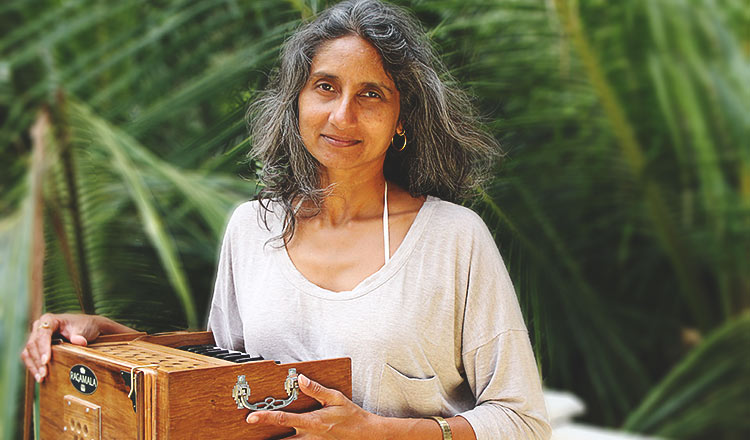 The Enchanted Life of Nina Rao: Chanting, Krishna Das, and the Hanuman Chalisa

It’s February 2016, and for several nights before the annual Krishna Das Yoga of Chant Retreat at the ashram, Nina Rao joins a group of ashram guests and yogis in the temple to recite a chapter of the Baghavad Gita and sing kirtan. A little later, she will accompany Krishna Das onstage, playing the Indian cymbals; right now, she’s simply doing something she loves.

The group grows and grows over these nights as word gets out that Nina is singing, sometimes accompanied by Krishna Das' drummer, Arjun. On the third night, it culminates in Nina leading her rendition of the well-known Hanuman Chalisa, the Hindu devotional hymn addressed to the monkey-god Hanuman, with which she has become associated.

Her relationship with the chant is as unlikely as it was inevitable.

The Seeds of Chant

Growing up in the Western way and moving every three years because her father was in management for Air India, Nina's first connection to Indian writing and song came through her grandfather, a retired engineer who lived in the small village of Bekal in south India. Visiting him at about age 9 when her family lived in Thailand, the little girl with no musical training but a deep curiosity began to read the books in her grandfather's library and fool around with his harmonium.

"One day I asked him to play and he said, 'Sing with me.' He was a natural, though untrained in music, and we sang the bhajans (prayerful songs) of South Indian poets. I had a tape recorder and I recorded him and the two of us singing. Then he said the words and I wrote them out in English. Amazingly, I still have those papers."

Her grandfather, the only one in the village to own a car, lived in a large house overlooking rice fields. Another year, he held a satsang (a group of people joined to pray and chant) in his large living room with the people of the village. "The best part was that it wasn't just Grandfather, everyone in the village took turns," Nina says. "I remember feeling this was the best thing that had ever happened to me.

"And I never did it again."

Nina grew older, went to college, and with her economics degree landed a job on the trading desk of a Wall Street firm. After five years she decided to follow her passion for nature and wildlife and in 1991, she launched a travel company, taking people to photograph wildlife in Africa and India. In the meantime, she became a yoga enthusiast. One day, she attended a yoga retreat offered by her teacher at which a fairly unknown kirtan singer named Krishna Das was to perform.

"I didn't know who he was but when I looked at the schedule it said, 'Satsang with Krishna Das' and I remembered the satsang in my grandfather's home. But I said to a friend, 'I'm too exhausted, I'll sit in the back; he's probably a failed Indian singer anyway' — although I did notice when we came in that there were pictures of Hanuman and Krishan Das’ guru, Maharajji (Neem Karoli Baba), on a table with a candle. The author of those books I used to read in my grandfather's home had also been a devotee of Neem Karoli Baba."

When Krishna Das walked into the room wearing black, she thought her worst fears had been realized.

"Then he sat down and started with Sri Ram Jai Ram, and I don't remember the rest of the evening. I became good friends with him right away. I was amazed at the heart opening. I would go to his kirtans and he gave me the book, Miracle of Love. And that's how the relationship started."

In those days, she says, not many people followed Krishna Das. "I still had my travel business but I wanted to support him. I learned how to play drums and we would go on weekends to play."

Seeing the love Krishna Das had for his guru, who died in 1973, her next big step was to go to India, to the temple of Neem Karoli Baba. There she met Siddhima, one of Maharajji’s closest devotees for 17 years. "I realized immediately that she was my guru; her whole presence reflects him," she says. "Having a relationship with her has been beautiful. She has been my guru for the last 18 years."

A lot of things started changing, Nina says, when the old stuff of her life began to fall away. She became a vegetarian, devoted herself to her practice, and chanted; chanting became a refuge, "more important than anything in the world."

Krishna Das again became a conduit, this time for the chant she loves best. He used to sing the Hanuman Chalisa in India with the kirtan wallahs (devotional singers), and when she first heard him sing it, he hadn't started to perform it live. "I was really drawn to it," she says. "It's dripping with devotion, even if you don't know it. Maharajji said that it's a maha mantra, which means it has it's own divine power."

"It's my path to sing wherever I can sing," she says, "although never in a million years did I think I would be sitting on a stage with musicians. I've just accepted that's the way it is."

When she had first started chanting with Krishna Das, she had a memory of her grandfather's harmonium and began to play an old harmonium Krishna Das had given her. "I remembered those chants and would sing them, and one melody of the Hanuman Chalisa KD liked very much. He asked me to share it with him before he went into the studio to record Flow of Grace.”

"He said, 'Let's do it as a duet.' and I said okay. He said 'Practice.' But when I arrived, there was only one mic. He said, 'You're singing it by yourself.' We recorded it in one take. He named that the Nina Chalisa."

The record was released in 2007, but by the time of the chanting and recording, Nina had closed her travel business, gotten married, and had a baby. In 2002, after her daughter was born, she took on the management of Krishna Das’ business. "It needed some organization and I've been doing it officially since then," she says.

After Flow of Grace, Krishna Das found himself at the forefront of the chanting movement in the U.S. People also began to love the Hanuman Chalisa, which Nina sang with Krishna Das and on her own for small groups.

"People were asking for a recording, so my daughter's father did the engineering and put out a disc of Hanuman Chalisa and one of regular kirtan." Nina Rao: Knower of All Hearts was released in 2013.

"I really love what KD is doing and want to support and continue what I can do for him and for myself," Nina says. This year, that will likely include a new CD.

Enjoy this video of Nina Rao Chanting the Hanuman Chalisa at the ashram. Krishna Das is a disciple of Indian sage Neem Karoli Baba. Layering traditional Hindu kirtan with accessible melodies and modern instrumentation, Krishna Das has become a worldwide icon and the best-selling Western chant artist of all time. His album Live Ananda (released in January 2012) was nominated for a Grammy in the Best New Age album category. The subject of the award-winning film One Track Heart: The Story of Krishna Das, he is first and foremost a devotee, with the sharing of his practice a profound act of his faith. Nina Rao learned traditional chants from her grandfather in a village in South India when she was nine years old. She is Krishna Das’ assistant and accompanies him on tour, playing cymbals and singing. Her recording Nina Chalisa can be found on his album Flow of Grace. Her own CD, Antarayaami: Knower of All Hearts, includes devotional kirtan, bhajan, and a variety of Hanuman Chalisa melodies, including a duet with Krishna Das. Learn more about The Enchanted Life of Nina Rao

One thought on “The Enchanted Life of Nina Rao: Chanting, Krishna Das, and the Hanuman Chalisa”