Towards a Bright Future

Join us this holiday season for a joyous celebration during our annual Christmas & New Year Unity in Diversity Symposium. World-renowned spiritual leaders, musicians and artists from different religions and spiritual traditions will inspire us and help us navigate this time of change and new beginnings as we move forward towards a bright future. Through live lectures, workshops, concerts, and performances, we will deepen our understanding of the spiritual path and how we can march forward towards a bright future for ourselves and humanity. We will reflect on the past year and establish a new, enlightened vision for the coming year.

The teaching of Unity in Diversity was at the core of Swami Vishnudevananda’s mission. According to yoga and Vedanta philosophy, the one God or Ultimate Reality manifests as a multiplicity of names, forms, shapes, and colors. There is an underlying unity which supports our manifested diversity. “Unity” and “diversity” are one and the same and their essence is our own essence: pure existence, pure consciousness, and pure bliss.

Join us for this spiritual gathering and gain a direct glimpse of this truth. Through talks, concerts, spiritual practices, discussions, and more, we will participate in breaking down artificial barriers and experience the unity in our diversity. Daniel Matt, PhD, is a teacher of Jewish spirituality and one of the world’s leading authorities on Kabbalah and the Zohar, the chief text of the Jewish Kabbalah, which he spent 18 years translating and annotating. For this work, Daniel has been honored with a National Jewish Book Award and a Koret Jewish Book Award, hailing his translation as “a monumental contribution to the history of Jewish thought.”

Widely featured in the media, including Time, Newsweek, and National Public Radio, he has published over a dozen books, including The Essential Kabbalah, which has been translated into eight languages and God and the Big Bang: Discovering Harmony between Science and Spirituality. Jeffrey Lloyd was born in New Providence, The Bahamas. He is the former Minister of Education in The Bahamas Parliament. He is a leader in Christianity and an active member in his Roman Catholic church. He is also a practitioner of Siddha yoga. Mr. Lloyd is married to the former Michelle Donna Marie Mitchell. He is the proud father of 5 daughters and also has 5 grand children. Shaykh Abdul Haqq is the national director of the Naqshandi Haqqani Sufi Order of America. He is a disciple of the famous Sufi Master, Shaykh Nazim Adil Al-Haqqani from Cyprus. He travels all over the world teaching Sufism and Islamic mysticism in universities, churches, synagogues, temples, and spiritual centers of diverse faiths. Lama Karma Chötso is a Buddhist nun and has been practicing within the Kagyu lineage for more than 35 years. She is the resident teacher of the Open Awareness Buddhist Center in Miami, and she practices as a meditator, teacher, writer, singer, and painter. Her sangha has built four Tibetan stupas at the Lama Residence in South Florida, and she is now helping in the building of a stupa for her sangha in Peru. Acharya Mangalananda is a direct disciple of Sri Anandamayi Ma, a venerated Indian saint of the 20th century. Though an American by birth, a lifetime of Indian culture has given him a deep immersion into the traditional spiritual music of India. He is now a kirtan singer well-versed in the traditional kirtan style of India’s rural villages.

Devoted to Sri Anandamaya Ma and her direct disciples, he helped establish a spiritually-based school for local village children after living in her ashram. After teaching in the school for twelve years, he toured internationally to give kirtan presentations and spiritual workshops. In 2013, he returned to the United States and now hosts a small ashram in the San Francisco Bay area, sharing kirtan and classes. Krishnan Namboodiri is a Tantric priest from South India, trained in the classical tradition of mantras (sacred sounds), pujas (prayer ceremonies), homas (fire rituals), and yantras (sacred geometric designs). He performs many daily and special rituals for the ashram. Swami Hridyananda is a direct disciple of Swami Vishnudevananda and senior staff at the  Yoga Retreat. She has spent over 35 years teaching different aspects of yoga, as well as teaching in Sivananda Yoga Teacher Training Courses. She also teaches meditation, thought power, chanting, and supports individuals on their inner transformative journey. Swami Paramananda is the manager of the Sivananda Ashram Yoga Ranch and longtime teacher of Sivananda Yoga Teacher Trainings in the Bahamas, New York, and India. A much-loved teacher admired for his humor, warmth, and devotion to the practice, he seamlessly weaves classical yoga teachings into modern daily life. 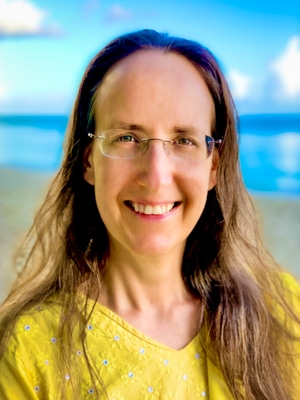 Rukmini Chaitanya is a senior staff member of the Sivananda Ashram Yoga Retreat Bahamas, and the personal assistant to Swami Swaroopananda, the Acharya, or spiritual director of the Ashram. She regularly teaches the Bhagavad Gita during the Sivananda Yoga Teacher training as well as other courses on the Bhagavad Gita, Vedanta, positive thinking, meditation, and yoga philosophy.

Rukmini Chaitanya is known for her enthusiastic and inspiring teaching style as well as for her devotion to the lineage and the scriptures. She is dedicated to each of her students and has an innate desire to share knowledge with them. She brings a great deal of clarity to every topic and is highly appreciated for her capacity to unfold complicated topics and present them in a coherent and pure way. Jnaneshwari Chaitanya is a senior staff member and teacher of the Sivananda Ashram Yoga Retreat. An experienced and devoted practitioner, she is an inspiring and insightful teacher of Yoga and Vedanta in Yoga teachers training courses and many of the ashram programs. Jnaneshwari Chaitanya is known for her clear and pure way of communicating the knowledge and its application in daily life, and is especially known for her skill in teaching the Bhagavad Gita.